The opium poppy (Papaver somniferum L.) is a plant with which human beings have maintained a long and complex relationship. It serves both as a highly nutritious food and one of the most widely used psychoactive and medicinal substances. Some of its key botanical features include having four-petaled flowers that vary in color, a capsule-like fruit that produces many seeds, and the production of a milky, white juice or latex that produces numerous pharmacologically important chemicals. These features make it a multipurpose plant that has served as a decorative flower, a source of nutritious seeds and oil, as well as a powerful medicine and narcotic (Bernáth 1998; Merlin 1984).

The white juice produced by the capsule serves as a defensive mechanism against predators that would injure the capsule and eat its seeds. It contains over 40 bitter chemical compounds called alkaloids in five different classes. Morphine is the most abundant and is an extraordinarily useful medicine that has been used for millennia (Hesse 1981; Petri and Mihalik 1998). It is also highly addictive as are other substances, such as heroine, that are produced by refining it. As such, the opium poppy and its alkaloids are at the center of conversations about the global opioid crisis.

Some key medicinal applications for which it has been used include the fact that it “dissipates the anxiety associated with pain”, promotes therapeutic sleep, reduces hunger and fever, treats diarrhea and heart failure, reduces cough, while at the same time producing a “mild euphoria and pleasant hallucinations”. Excessive doses result in nausea, convulsions, or death (Merlin 1984: 91).

The pharmacological actions of different varieties of poppy, as well as the dangers of opium, were well known by at least the 1st century A.D. It is significant that textual sources report that different types of poppies were also used, such as the red poppy, and that different preparations of the opium poppy and its opium were also identified (Plin, Nat. Hist. 20.26, 76; Cels. 6.6). It may be added that the Egyptian medical text, the Ebers papyrus, dating to the 16th century B.C. also lists many uses of poppy juice. The text includes not only ingredient lists, but detailed directions for preparation and consumption, which are intimately tied to concepts of the Egyptian religion. It is important to note also that Egypt’s highly developed medical and botanical knowledge was drawn on heavily by the ancient Greeks (Bryan 1930; Carpenter et al. 1998). Thus, it is fair to assume that the statements in these earliest texts are the result of many centuries of accumulated knowledge based on intimate interactions with the natural world.

Today it is well known that the poppy seeds and the alkaloid-rich opium are synthesized and harvested from different parts of the plant in different ways. The seeds are obtained from inside the poppy capsule and may be harvested at various stages (Kapoor 1995; Merlin 1984). Depending on the point of harvest, different varieties: blue, gray, white, etc. of the seed are obtained, which also have different flavor profiles (Pers. Comm. Dr. Steggman-Rajtar Feb. 2019). Opium derives from the exterior coat of the poppy capsule and functions botanically as a defensive mechanism, to protect the seeds inside the capsule (Kapoor 1995). 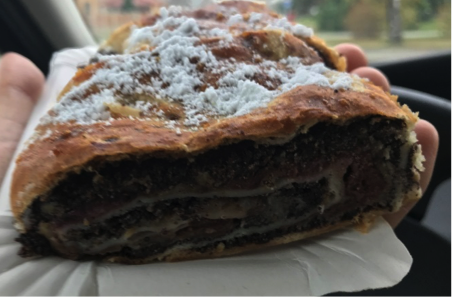 Poppy seeds also have culinary uses. As a food source, the nutritional value of poppy seeds is quite high, largely due to their high oil content. This oil, which has a long shelf-life and thus is slow drying, contains various vitamins and minerals. It is especially high in Vitamin E and the essential fatty acid linoleic acid, which is key to growth and development (Lančaričová et al. 2016). Central Europeans, Slovaks in particular, produce a number of food items from poppy seed and poppy seed oil, such as baked goods in which poppy seeds are ground and mixed with honey or breads with poppy seeds sprinkled on top (Fejer and Salamon 2014; Hajnalová 2012). Some of these recipes have long histories dating to the Roman period (Beranová 2012). Olive oil, one of the key edible and industrial oils of ancient times, is high in oleic acid, but relatively low in linoleic (Kapoor 1995). The benefits of poppy seed oil in recent years, despite growing concerns of opioid misuse worldwide, have received greater attention.

Researching opium use in antiquity is therefore complicated by a number of factors. Chief amongst these is that it has been utilized on a global scale and thus has a long and complex history. There are many references in ancient texts dating to different times, which may result in presumptions about more ancient uses, all of which are not necessarily documented (Merlin 1984). Such research also requires careful attention to cultural and ecological context. For the opium poppy, there is an added requirement of differentiating between subsistence and prestigious use. Moreover, because it is a weedy species that readily moves into disturbed landscapes, botanical remains must be shown to be cultural and contemporary with human settlement. Since there are multiple Papaver species, the species must be identified, human use should be indicated, and, if suggesting use as a psychoactive substance or medicine, a non-subsistence use must also be demonstrated (Merlin 1984). 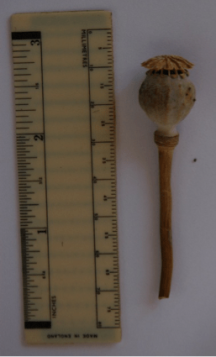 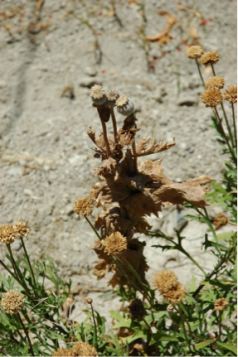 The case of proposed ancient opium use that has received the most attention pertains to Bronze Age Cyprus, where Merrillees (2003[1962]) argued that a particular vessel form, the Base Ring juglet, was modeled in the shape of an inverted poppy capsule, as a way to communicate the vessel’s valuable contents. These vessels, along with many other vessel types and other commodities, were exported to urban centers in the eastern Mediterranean. If a relationship could be demonstrated between vessel form and contents, then the implications would be great – effectively documenting a Bronze Age opium trade. At the University at Albany, an interdisciplinary team from Chemistry and Anthropology attempted to evaluate this hypothesis by modeling the chemical degradation of opium alkaloids with Gas Chromatography/Mass Spectrometry (GC/MS)(Chovanec et al. 2012).

Key observations of this study were that morphine, the most abundant alkaloid in opium, degraded quickly, but that noscapine and papaverine and their derivatives proved to be relatively stable. These results were then applied to a range of archaeological samples (Chovanec 2013). In the end, a direct association between the Base Ring juglets in Cyprus and opium could not be demonstrated, as a series of other products were found in these vessels from Cyprus and Israel (Chovanec 2013; Chovanec et al. 2015). But that does not mean that opium was not known. In 1989, Evans reported that opium was identified in two Base Ring juglet sherds: one from Tell el-Ajjul, Egypt in the Rockefeller Museum in Jerusalem and the second from the study collection at the Institute of Archaeology, University of London, with no known provenience, but presumed to be from Palestine (Merrillees 2003[1989]). However, no analytical details were provided in the report, which makes it difficult to evaluate.

In more detailed studies, the identification of opium alkaloids in unstratified Base Ring juglets obtained from Egypt (Koschel 1996; Smith et al. 2018), alongside the identification of noscapine in a Red Polished feeding bottle from a Middle Bronze Age Cypriot settlement (Chovanec 2018) suggests a more complicated relationship with this important plant that spans millennia and multiple regions. The latter example is significant because it is the only positive result for opium-related chemicals from a secure context in Cyprus, and, furthermore, it predates the appearance of Base Ring ware.

A Longue Durée Approach to Culture Use

These findings, along with my knowledge of the role of the opium poppy or “mak” in Slovak culture, led me to Slovakia as a U.S. Fulbright Scholar in 2018. Over a period of six months, I researched the history of the opium poppy from the Neolithic to the Late Medieval period by collecting archaeobotanical data, examining artifacts with representations resembling poppies or that may had a prestigious function, and referencing historical and ethnographic sources regarding medicinal and subsistence uses of the plant.

From this research, it is clear that the opium poppy served as an important agricultural resource for millennia, having been introduced to Central Europe from the Western Mediterranean as a domesticated plant. There are some important questions raised relating to the preservation, recovery, and interpretation of archaeobotanical evidence in Slovakia in particular, but Central Europe in general, that have a bearing on this avenue of research (Hajnalová 2012; Zohary et al. 2012). In this regard, the documentation of agricultural practices pertaining to the opium poppy, but also crops with which it was commonly cultivated (i.e., flax and hemp), provide crucial insights into the taphonomic processes by which opium poppy macrobotanical remains enter the archaeological record.

Ethnographic information from folk songs and stories, crafts, decorations, and plentiful recipes involving poppy seeds raise the question of how and when the opium poppy was incorporated into Slovak culture. Characters like makova panenka, or the poppy girl, clearly indicate knowledge of the sleep-inducing action of the plant. So too does the old practice of making poppy tea for a colicky child. The symbol of the opium poppy and its use as a decorative element, which is seemingly ubiquitous in Slovak culture, often seems associated with its medicinal actions and was historically seen as a way to ward off ghosts, witches, and spirits, which may explain the frequent use of halved and dried poppy capsules alongside garlic. However, poppy seeds and the dried plant also are associated with prosperity, likely due to its abundance of seeds (Centrum pre tradičnú ľudovú kultúru; Novotná a Kvietok 2015).

Crafts incorporating the opium poppy in festivals and street markets in Trnava, Slovakia

Examining the history of use of a multipurpose plant such as the opium poppy in the longue durée makes it possible to widen our understanding of the complexity of human-plant relationships. Organic residue analysis plays a key role in this endeavor in testing hypotheses regarding delineating patterns of use in particular historical contexts. Such methods will continue to be instrumental in further examining the dynamic relationship that people maintained with this plant in Central Europe and beyond, but it cannot do so in the absence of contextual cultural, botanical and archaeological information.

Chovanec, Z., Bunimovitz, S., and Z. Lederman. 2015. Is There Opium In These Juglets? Analysis of Cypriot Base Ring Juglets from Tel Beth-Shemesh, Israel. Mediterranean Archaeology and Archaeometry 15.2. (http://maajournal.com/Issues/2015/Vol15-2/Full14.pdf).

Chovanec, Z., S. M. Rafferty, and S. Swiny. 2012. Opium for the Masses: An Experimental Archaeological Approach in Determining the Antiquity of the Opium Poppy. Journal of Ethnoarchaeology. 4(1): 5-35.

Halioua, B. and B. Ziskind. 2005. Medicine in the Days of the Pharoahs. Tr. M.B. DeBevoise. Cambridge: The Belknap Press of Harvard University Press.